This Friday, Japanese Company Media Factory confirmed in the newest issue of Square Enix's Young Gangan magazine, that there will be an anime adaption of the manga Hidan no Aria AA. 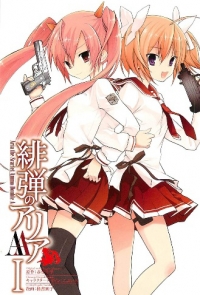 Hidan no Aria AA, from Akamatsu Chuugaku and Kobuichi, is a spin-off of Hidan no Aria, which is base on the Light Novel with the same title. The manga was first published in Young Gang magazine in 2010. Square Enix published, until now the eight volume long and still running manga in August this year.

The plot of the manga set about Akira Mamiya, a first-year E-rank student at Butei High School in Tokyo. She want's to become a Butei and idolizes S-rank senior student Aria H. Kazaki. The High School has a special paring system, called “Amica” where one senior student is paired with one junior student for training. Notwithstanding the fact that she has only a E-rank, she tries everything to become Aria's partner.

The light novel has already received a anime aption in 2011. It was animated by J.C. STAFF and was licenced by FUNimation in the USA; Manga Entertainment in the UK and Madman Entertainment in Australia. 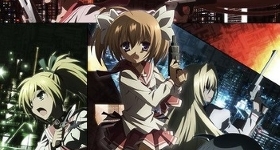