Third season of anime series Working!! announced for next year.

On a flyer, which was inserted in the 13th issue of the four-panel comedy manga Working!! from Karino Takatsu announced the third season of the anime Working!! under the title Working!!!. The season will premiere in Japan in July 2015.

They also announced the staff and the cast for the next season. Yumi Kamakura will direct the series at A-1 Pictures. Monaca will again compose the music just like Shingo Adachi who created the character design and will take on the role as animation director.

Screenshots from the first and second season
ANN The family restaurant Wagnaria stands by itself in Hokkaido. One day, Souta Takanashi, who loves all things small, meets tiny little Poplar, who offers him a job working part time at the restaurant. Attracted by her petite stature, Sota accepts her offer. To his surprise, the restaurant is filled with eccentric characters. Get ready to dish up some wacky comedy together with Souta and his coworkers!
Crunchyroll streamed the first and second season as simulcast and NIS America released both seasons under the name Wagnaria!! on DVD and Blu-ray. 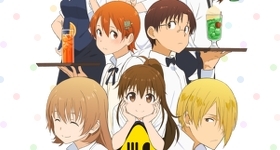