FUNimation announced this Monday, that they aqquired the home video rights of anime Inari Kon Kon. They had already streamed the series from January until March 2014. Now they also have the license for a DVD/Blu-ray release with japanese dub and english subtitles, which is planned for 2015.

The anime series is based on the romantic-comedy manga from Mangaka Morehe Yoshida.

Toru Takahashi directed the anime at Production IMS, with assistant director Hideki Okomoto who also produced the script, while Yuka Takashina created the character design and had the role as the animation director. The soundtrack was composed by Takeshi Senoo.

ANN Inari Fushimi is a middle school girl who's never had a requited love, since she's a shy, clumsy and not very bright. One day, she witnesses her crush Kouji giving a letter to her classmate Akemi. Shocked and saddened, Inari rushes to a shrine, where the goddess Uka-no-Mitama-no-Kami appears to her. As thanks for saving a fox pup, as well as out of pity for her plight, the goddess grants Inari the power to shape-shift.
FUNimation also acquired the OVA episode, and will add it to the home video release. 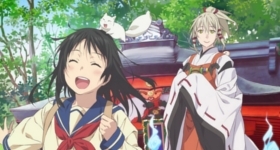