The anime is based on the manga Sketchbook from Totan Kobako, run's in Mag Garden's magzine's Comic Blade and Comic Garden since February 2002.

While the anime ran in Japan in the Fall Season 2007, Crunchyroll streamed the anime series in September 2009.

Fandom PostSora Kajiwara is a shy first year who joined the art club at her school. Sora slowly becomes less shy as she befriends everyone in the art club. She also grows artistically and learns how to sketch the beautiful world around her… and cats!
Nozomi Entertainment has no more information such as the publishing date, but it's planned to release the series as a complete series box. 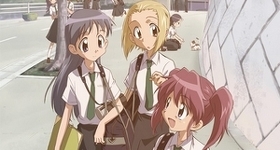