Kyoto Animation published the first full trailer on their website for its upcoming Gekijouban Kyoukai no Kanata: I'll Be Here - Mirai-hen (Beyond the Boundary The Movie: I'll Be Here - Future Chapter) film on Saturday.

The series, Kyoukai no Kanata, premiered first in 2013 and was simultaneously simulcasted by Crunchyroll in many different countries. Sentai Filmworks also announced in October 2013, that they licensed the series.

Nagomu Toriis Light Novel Kyoukai no Kanata, which the series and the films are based on, received an honorable mention in 2011 in the Light Novel-category of Kyoto Animations Awards.

Kyoto Animation also announced several new voice actors and the staff for the films on saturday. 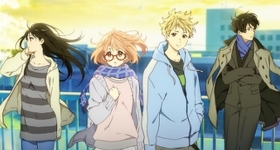