First concerns were raised just after the removal of the release date on the website of the announced movie „Evangelion 4.0 – Final“. Now an official statement confirmed these concerns: The production of the last part of the NGE-Remake has been canceled!

Hideaki Anno, creator of „Neon Genesis Evangelion“ and the „Rebuild“-Series, which was originally planned as a tetralogy, revealed in an official statement, that the production of the 4th movie has been canceled. Reason for this is, that there have been internal differences between high-rank staff members of studio Khara and Anno himself. This occasioned him to suspend his cooperation with the production team immediately.

The footage that has been produced by now, will be used by Studio Khara to create a new Spin-Off with Mari Illustrious Makinami starring as the main character. Furthermore there were talks about a sequel to the 2000s-anime „Fooly Cooly“. Additional information is not yet available.

First designs of the mentioned Spin-Off-Poject have also been released:


In the past Anno conspicuously often changed his mind during the production process of anime he was envolved with. Recently these problems occured during the making of  „Evangelion 3.33 You can (not) Redo“ leaving the concept of the film to be rebuild from scratch.

This news was meant to be an April Fool's joke! :) 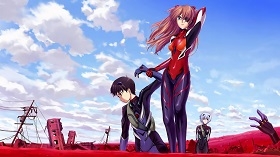