Everyone who’s been aboard for Luffy’s great voyage for any extended amount of time, in One Piece, is familiar with the Seven Warlords of the Sea and knows of their influence on the world. Thus, encounters between any of them ‒ starting with Dracule Mihawk and eventually Don Quixote Doflamingo ‒ and the Strawhat Pirates shouldn’t be that surprising. While some of these encounters happened rather peacefully, others ended with the crushing defeat of the other party. This time we would like to know which of the currently known Seven Warlords is your personal favourite. Feel free to let us know in the comments just why this Warlord is your favourite. 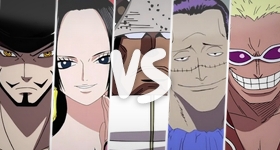