Soul Eater’s Shibusen is well known to anyone who has seen the anime or read the manga—and most prominently so for its masters and weapons. Even now, four years after the manga series has officially ended, Soul Eater is still going strong and many cosplayers dress up as characters from the series for anime and manga conventions. Now it’s up to you to tell us and vote for the team—consisting of a master and their weapons—that is your favourite! Let us know in the comments which team you like the most and why!

The choices only contain the primary pairings! 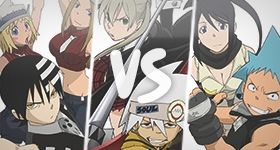