Board and card games like Go or Karuta aren’t all that common here in Europe, in Japan, however, they’re rather widespread. So it’s also not all that surprising, that several anime and manga took up the topic and are centered around these sports. Now we want to know from you: Did you ever try any of the following games due to an anime invoking your interest for it? Be it on conventions, at home with friends or alone using an app, we would like to know! If you did, how did you like it? Share your experiences and thoughts on these games with us in the comments. We’re looking forward to what you have to say!

I started knowing the rules of igo ( aka: Go) on a convention in 2001, There where a national federation running tournaments and even European ones.

Later, at a Manga and Anime Club, we know by Naruto the true name of "Shougi" ( at Spanish translation was called "kind of Chess, so we never get to find anything about before) late in 2006, since then I made myself to start promoting it ( the game of Shogi) in Spain., and later even become in contact with "FESA (Federation of European Shogi Associations, with was started on 1985 to organise the European Shogi Championship. Federation of which I was the 1st Spanish representative since 2011, until last year (2018). It was my main purpose to learn English, just because I wanted to learn more about Shogi, and be in touch with FESA. :p

so here the FESA website link: ( with many other links in several languages, BTW! German is one of the biggest countries with Shogi players in active). With manage the RATINGS list ( where I am ranked number 882 of 1413 players) 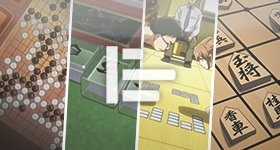