Near the end of the year, it is supposed to happen: Sony and Microsoft are to release their new generation of gaming consoles (if the corona pandemic permits) and many of us gamers will be facing the tough decision of whether to buy one of the new devices and, if so, which one.

Both the PlayStation 5 and the Xbox Series X are supposed to be extremely powerful gaming consoles, whose games are meant to enthral us more than ever before. The hardware and performance data of the two consoles is impressive, however, one shouldn’t attach too much importance to marketing and “Teraflops” values. Far more important than that is the interplay of each individual piece of hardware and that’s where the big differences between the PlayStation 5 and the Xbox Series X lie. Nevertheless, here are the bare figures:
Do let us know in the comments, why you chose one console over the other! Was it the integrated hardware? Maybe it was the exclusive games or the controller? Or is there perhaps a totally different reason for your decision? 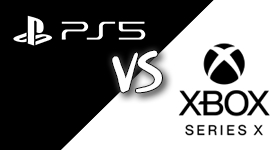