Australian Publisher Madman Entertainment announced that they will release the anime series No-Rin in 2015, which is based on the light novel with the same name. The series was directed by Shin Oonuma at Frontier Works together with Silver Link. The original character design comes from Shirow Shiratori. Michiko Yokote created the script and composition.

FandompostThe sudden retirement of the famous idol Yuka Kusakabe from the entertainment business shocks the world and devastates her biggest fan, teenager Kosaku Hata. His classmates at the Tamo Agriculture School manages to get him out of his depression and bring him out of his room to attend his classes. But to everyone's surprise, Yuka Kusakabe--her stage name--comes into their class under the name Ringo Kinoshita as a transfer student. Kosaku realizes he has a once-in-a-lifetime opportunity to get to personally know his dream girl and, together with his group of friends, try to find out why she came to the agricultural school and become more than just classmates.
Madman Entertainment will stream the series on their streaming platform AnimeLab and publish it in 2015 on DVD and Blu-ray. If there will be an english dub or only japanese dub with subtitles is currently unknown. 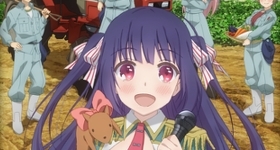