The January issue of Hakusensha's LaLa magazine is announcing on Saturday, that Matsuri Hino will publish an all-new chapter of her Vampire Knight manga in the March 2015 issue of LaLaDX on February 10th.

The "Vampire Knight Special Edition" chapter will be 40 pages long. The manga itself began in November 2004 and ended in May 2013 with 19 volumes/93 chapters. 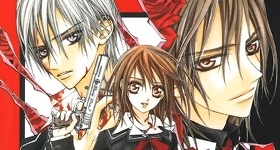