The official website for the second live-action film of Hitoshi Iwaaki's science-fiction manga Parasyte published a trailer on their site on Saturday. Kiseijuu Kanketsu-hen (Parasyte: The Final Act) will start airing in theatres in Japan on 25th April.

Shouta Sometani (xxxHOLiC, All Esper Dayo!) plays the main character, Shin'ichi Izumi, while Eri Fukatsu (Onnanoko Monogatari) embodies Ryouko Tamiya. Other roles like Shin'ichi's teacher, who has a parasyte in herself, or Satomi Murano, Shin'ichi's girlfriend and classmate, will be performed by Eri Fukatsu as well (first role) and Ai Hashimoto (Blood-C: The Last Dark, Another, Sadako 3D).

Story of the manga
They arrive in silence and darkness. They descend from the skies. They have a hunger for human flesh. They are everywhere. They are parasites, alien creatures who must invade–and take control of–a human host to survive. And once they have infected their victims, they can assume any deadly form they choose: monsters with giant teeth, winged demons, creatures with blades for hands. But most have chosen to conceal their lethal purpose behind ordinary human faces. So no one knows their secret–except an ordinary high school student. Shin is battling for control of his own body against an alien parasite, but can he find a way to warn humanity of the horrors to come?
Source: ANN 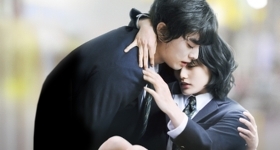